The date I get my left Periacetabular Osteotomy with first look arthroscopy.

Lets hope the hip is in good enough condition to have the PAO, if in surgery he feels it will not be good enough for the reconstruction, he'll close up and I'll see his colleague for a replacement a couple of weeks later. 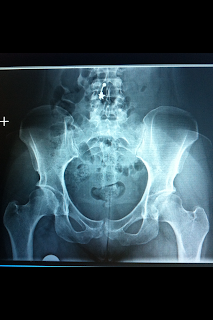 Official countdown:  150 days.
Posted by Hotchickie at 3:49 PM No comments:

I believe I have herniated fat and or muscle through some fascia.  Last weekend I woke up on Sunday with a small, well defined lump on the lateral aspect of my hip.  I thought WOW it sure is swollen but didn't think much of it.  I iced more and thought it would resolve.  It remained stable until Thursday when I got home from the hospital it was huge.

It is soft, well defined, and slightly tender.  I asked my residents if herniation was a possibility and it most certainly is a very likely possibility.  They told me to call my surgeon to notify him.  I think that I should let him know, but really, what is he going to do for me now?  He'll look at it and say, yes, you've herniated, maybe we will fix it during the surgery next year, collect his money, and move on his merry way.  And I'll end up with $25 co-pay and not any more information than I have now.  So, I didn't call. But I will be in contact with him if it changes in any way.  I would imagine strangulation of the tissue is a concern, so if it gets red, hot, bigger, I'll ABSOLUTELY call and get it taken care of ASAP.  Why must this dang hip remain so interesting?  I'm over it.

I was going to put up a picture of the lump, but I'll spare any posting of my butt online....it would be traumatizing for all involved.

159 days until school ends (and hopefully surgery day....will schedule it later on this month early next month).
Posted by Hotchickie at 11:06 AM No comments:

Ha!  I started a new rotation today. This new rotation is a great program to which I plan to apply for residency.  It was a good day, although hard to tell my first day how great of a program it is.  Stupid thing though, to leave the hospital I have to walk through the Children's Surgical Center.  I felt sick by the time I got to my car at the end of the day because in less than six months, I will be at this surgical center getting my hip fixed.  It's just weird to see the place where such a life changing surgery will take place.
Posted by Hotchickie at 7:40 PM No comments: